We’ve discussed these two dimensions at length in previous posts.

Not only are they stand-alone aspects that aid cross-cultural understanding, but social psychologist, Geert Hofstede, has applied these two dimensions to create cultural analogies that help simplify foreign workplace environments.

Power distance is the degree to which cultures accept and expect the unequal distribution of power amongst members of organizations and institutions.

Uncertainty avoidance is the measure of acceptance and expectation for unpredictability and chaos in society.

Those cultures with high levels of uncertainty avoidance have a low tolerance for unpredictability and ambiguity, resulting in rule-oriented, law-abiding societies.

Those cultures with low levels of uncertainty avoidance have a high tolerance for the same, resulting in societies willing to take more risks, tolerate a wider variety of opinions, and not follow rules so strictly.

Arranging these two dimensions on the axes of a matrix, Hofstede produced a set of helpful analogies to better understand the work cultures of the United Kingdom, China, Germany, and France. 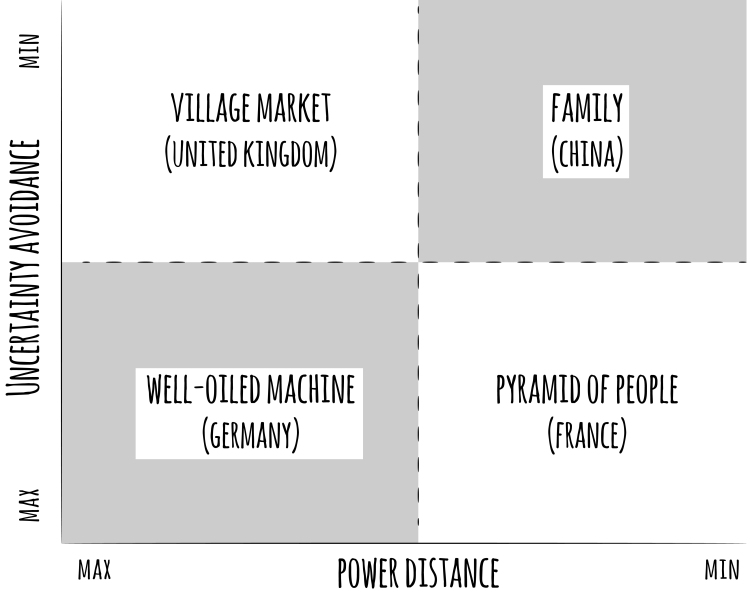 With its low uncertainty avoidance and low power distance, a typical English company is like a village market, in that it combines risk-taking with flat hierarchies, resulting in the classic entrepreneurial spirit.

Germany also shares the flat workplace hierarchies (low power distance) with the British; however, German culture has a high uncertainty avoidance, making typical German companies efficient and inflexible, more like a “well-oiled machine” or a clock. Rules are strictly followed, with decentralized decision-making and each equally important wheel working together.

The typical French company is described as a “royal court” or “pyramid of people.” The culture is one of high power distance, where everyone knows their place and decision-making is centralized. They also share high uncertainty avoidance with the Germans, meaning rules are strictly followed, resulting in a complex network of relationships across the levels of hierarchy. Power and authority are highly valued.

The best analogy for a Chinese company is that of a family with a head patriarch. Like France, China values high power distance and, like England, low uncertainty avoidance. This means that, despite having a typical hierarchical society that values company loyalty, risks and rule-bending are embraced, which has helped to position China as an economic superpower.

Although I can’t stress enough that analogies are never perfect and nothing is one-size-fits-all, they do allow managers to form mental models, aiding understanding in the workplace environments of foreign countries.

These are uncertain times.

The current climate has everyone spinning, trying to make sense from the senseless and turn the upside-down rightside-up again.

With so much conflicting information, so many question marks and dashed plans, ambiguity tolerance has never been more important.

Last week, we talked a little about uncertainty avoidance and ambiguity tolerance. In this post, we’ll discuss how to develop the latter.

Parental and cultural ideologies teach us right versus wrong and good versus bad.

Racism, for instance, stems from these very distinctions. The concepts of good and evil are clearly defined in such extreme ideologies, leaving little room for relativism or doubt.

When a system has strong rules and norms, ambiguity tolerance is often lower.

People, situations, and ideas are still labeled and placed in boxes but said boxes are open and cardboard, allowing easier interchangeability, not hard and inflexible under lock and key.

Oftentimes, the more diverse a place is, the higher the ambiguity tolerance – both because there’s need for it in order to keep relative peace and because there’s exposure to others, hence less uncertainty.

No matter where you come from, you can improve your ambiguity tolerance to better adapt to places and situations that are strange to you.

In other words, you can improve your coping mechanisms instead of simply avoiding uncertainty.

The following are some key ways in which to tolerate ambiguity:

For more than half a century, ambiguity tolerance has been a subject of research in various branches of psychology.

One of the premiere studies on the topic analyzed ethnic prejudices in California.

Personality, company culture, and national culture have since been measured by this variable.

One such expression of ambiguity tolerance was identified by social psychologist Geert Hofstede’s research under the umbrella of “uncertainty avoidance.”

We’ve discussed Hofstede’s work in this area before.

For all intents and purposes, we’ll only be discussing the dimension of uncertainty avoidance in this post.

Hofstede describes this dimension as the idea that:

“What is different is dangerous.”

He anecdotally illustrates an example of this.

An elderly American couple finds themselves babysitting their grandchildren in a small town in Italy, while the parents are temporarily located there. The grandchildren are friends with local Italian children, who all enjoy playing in the central piazza.

So, there the American grandparents are, allowing their grandchildren to run free with little restriction. Accustomed to “free play,” they don’t stand in the way of their grandchildren messing about, even if they fall down and lightly hurt themselves.

The Italian grandparents, on the other hand, are on it. Not only are their grandkids not allowed for a moment out of their sight, but any hurts that befall them are conscientiously dealt with. The child is picked up and brushed off in an instant.

This illustrates the differences in ambiguity tolerance between Americans and Italians.

Safe versus dangerous and clean versus dirty are two distinctions that an Italian child learns first during primary socialization.

The American grandparents see nothing to worry about with the dirt and danger in the piazza. In fact, they see no dirt or danger there, whatsoever.

Furnham and Ribchester define it in their research:

“Ambiguity tolerance refers to the way and degree to which an individual or group perceives and processes information about ambiguous situations or stimuli when confronted by an array of unfamiliar, complex, or incongruent clues.”

Ambiguous stimuli cause a person with low ambiguity tolerance to avoid, feel stress, and react hastily.

Someone with high ambiguity tolerance may seek out ambiguous stimuli, as they desire to engage with such interesting and challenging environments.

As you might assume, entering into a foreign culture is an ambiguous enterprise. You are hit with unknown stimuli, so a high ambiguity tolerance – or your ability to develop it – is an essential attribute for a foreign manager.

We’ll talk more about how to do just that next week.

That’s what Hofstede found in his research.

But in what dimensions can we categorize these differences?

And at what value does your culture fall along the scale?

Last week, we talked about how Hofstede’s research led him to designate four cultural dimensions.

With further research, he developed five.

We’ve talked extensively about uncertainty avoidance over the past few posts.

When valuing a culture’s uncertainty avoidance versus their uncertainty tolerance, ask yourself: Does the society prefer a stable environment? Is risk-taking avoided? Or does the culture promote innovation and demonstrate risk-taking behaviors and an ability to adapt quickly to uncertain events and changeable environments?

Some cultures want satisfaction here and now, while others are programmed to look toward the future.

Is this a culture of instant gratification? Or is the society accepting of delayed material, emotional, and social needs?

Power distance has to do with a culture’s perception of the fair distribution of power. Some cultures strive for a level playing field, while for others, power is allotted to few.

Is equality preferred over hierarchy? Are subordinates accepting of their lower positions, or is there a more democratic power structure?

Is the culture more family/group-oriented or does it promote individual ambition and achievement?

The foundation of a masculine culture is based in more traditionally masculine traits and vice versa.

Does the culture thrive on competition and aggression? Or does it encourage cooperation and the nurturing of its community members?

Piggybacking off of Hofstede’s research and insights, other researchers have identified further cultural dimensions, including:

In rule-based cultures, behavior is governed by rules and laws.

Polite cultures consider the feelings of others, while courtesy takes a backseat to justice in “rude” cultures.

Does the culture “turn the other cheek”? Or is “an eye for an eye” the motto?

As research into cross-cultural differences progresses, the data discovered will, no doubt, paint a more intricate picture of the many dimensions in which cultures differ.

The data available to us now enables us to understand more clearly what motivates individuals from different cultural backgrounds – and how cultures operate, as a whole.

We’ll delve deeper into these dimensions next week.

Imagine your country is number one.

Number one in economic growth.

That’s what Japan was experiencing between the end of WWII and the Cold War.

While the country was still behind the United States, it became the world’s second-largest economy after its defeat in WWII.

Termed the “Japanese Miracle,” Tom Peters and Robert H. Waterman were so interested in this economic boom that they wrote a book about it.

In Search of Excellence was written in the early ‘80s. It concluded that the Japanese outperformance of the Americans in terms of growth was due to differences in culture.

Culture and cultural studies were finally becoming a focal point to more than only those who studied social sciences. Big corporate CEOs were starting to see cross-cultural research as a tool for success in business.

As we discussed last week, Hofstede had discovered differences in culture while analyzing the outcomes of a company-wide survey for IBM.

In doing so, he offered the first scientifically-founded analysis of cultural differences in the workplace.

In 1980, he also published a book, Culture’s Consequences. By the turn of the century, Hofstede’s work had been cited more than 2000 times, with no empirical work as influential in the fields of psychology or culture.

According to Hofstede’s research, nations differed in four cultural dimensions.

The dimensions denoted sets of values, scaled from one extreme to the other. After surveying the populous of various cultures, each nation was valued between these two poles.

One dimension involved “Uncertainty Avoidance” – to what degree a culture’s members are comfortable/uncomfortable in unknown, surprising, or situations that differed from their cultural norm.

This dimension suggests which cultures maintain tradition and fear change and which are open to risk-taking and innovation.

The dimension of Uncertainty Avoidance was discovered when Hofstede looked at the survey’s responses to questions about work-related stress.

An example of a work-related question in the survey:

How often do you feel nervous or tense at work?

Another correlating question asked whether one should break company rules if doing so was in the best interest of the company.

Further, employees were asked if they had long-term plans to stay with the company.

The survey found that some cultures appreciated change, and these were the same cultures that were less affected by stress.

Those cultures that avoided change and were more affected by stress were often also more bound by rituals, laws, bureaucracy, and tradition.

For example, Latin American cultures are layered in procedures and rules and are considered “uncertainty avoiding” cultures.

Next week, we’ll talk about more of the dimensions discovered by Hofstede.