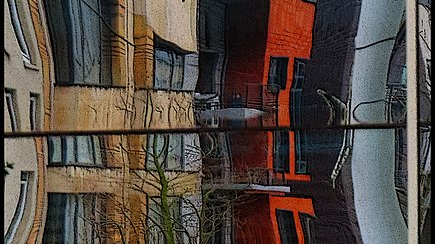 Stereotypes: A “Solid Impression” or a Funhouse Mirror?

Imagine you’re trying to navigate yourself to a restaurant in a big city.

You open up Google Earth, plug in the address, and find the coordinates.

At first, you’re in satellite view. So many details – lines, colors, buildings, trees. With such an intricate bird’s-eye perspective, it’s hard to focus and find the way.

However, when you switch over to map view, everything is suddenly simplified and much clearer.

Analogies are the map views of a culture. They simplify a culture’s complexity, clearing the way to understanding by providing less – but more pertinent – information.

Analogies strip away the details you don’t need, leaving only those that you do.

While this is most certainly helpful in a lot of ways, you must be careful with simplified views.

A simplified map can leave out roadblocks, traffic jams, or other valuable information that might have altered your chosen route or decision-making.

This can especially happen when we use stereotypes as our simplified cultural maps.

The word “stereotype” is rooted in the Greek words for firm/solid (“stereos”) and impression (“typos”).

In the late 18th century, the term was used by Firmin Didot in printing to describe printing plates that duplicate typography.

Rather than using the original plate, the stereotype (duplicate printing plate) was used for printing.

The meaning of the word changed in the early 20th century when American journalist, Walter Lippmann, used it analogously in relation to the characteristics of a group of people.

As a stereotype is a solid impression in the printing process, so it is in people’s minds in relation to groups or cultures.

Lippmann saw this, defining the word as,

“a distorted picture or image in a person’s mind, not based on personal experience, but derived culturally.”

Stereotypes are like a funhouse mirror: conditioning that distorts our image of “the other.”

Lippmann warned of the dangers of such bias. In Public Opinion (1922), he wrote,

“The only feeling that anyone can have about an event he does not experience is the feeling aroused by his mental image of that event.”

In this way, our feelings about an event (or a people) are not based in truth if we have no experience with said event/people.

They’re based on a stereotype.

Stereotypes condition us to deflect valid and true claims that do not align with our own, grounded in often negative attitudes and perceptions of “the other” – attitudes that are regularly driven by social and political motivations.

How Are Stereotypes Different Than Analogies

Although stereotypes and analogies work in a similar fashion in that they simplify the mechanics and behaviors that drive a culture’s people, the aim of creating analogies is to enable one to work effectively in a cross-cultural environment.

The aim of stereotypes, on the other hand, is often to contrast characteristics of other cultures that conflict with one’s own, essentially blanketing them over an entire group.

Swiss are punctual; Indians are late.

Italians are jovial; Brits have a stiff upper lip.

Americans are superficial; the Japanese are polite.

While stereotypical characteristics may not always be negative or evil, applying them to an entire people can result in prejudice of said people and individuals, which is of course ineffective to cross-cultural leadership and understanding.

Next week, we’ll talk about taking a wise approach to stereotypes.